Yesterday’s demonstration in the village of Nabi Sale (en.wikipedia.org/wiki/nabi_salih)  was a bit disappointing: it was very small; maybe a dozen or two villagers (mainly young men with slingshots), 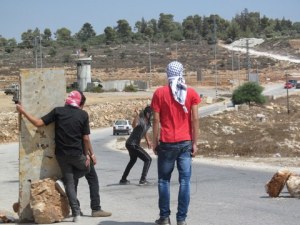 and the stone hurling seemed to start as soon as the demo – as in N’ilin, unlike my experience of Bil’in. Sure, it’s symbolic.  But the soldiers and other Israelis don’t see it that way, so in the end it’s counterproductive, imho. In fact, I got the impression that the soldiers weren’t all that eager for confrontation, perhaps because the wind was blowing most of the teargas back in their direction,

but whenever things quieted down, the boys would hurl more stones to stir things up again. Seemed to me senseless provocation. 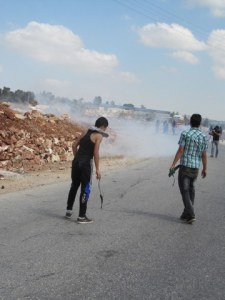 I got a lot of photos, though,

For some Nabi Saleh folks, the demos are a family affair 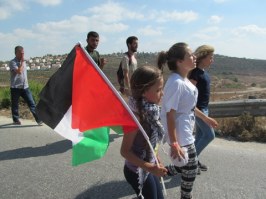 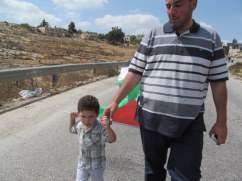 and spoke with some interesting people.   I had been driven there in a car with three other activists, the driver, Hertzel Schubert, is an old-time member of Matzpen Tel Aviv. Unfortunately, he wanted to stay till the bitter end (I wasn’t comfortable being a ‘protective presence’ for stone-throwing youth and would happily have left early), so I couldn’t leave early for Ramallah in time to reach Jerusalem for the Sheikh Jarrah demo, since most of my stuff was in his car. The other two in the car (a couple of young Israeli women) ignored my questions; nowhere near as friendly as the Ta’ayush folks the next day (to give them the benefit of the doubt, maybe they were wearing earbuds that I couldn’t see.)

I did chat with a couple of Italian women at the demo ,

part of a delegation from an organization that advocates worldwide for access to water, and to a Syrian Druze journalist from the occupied Golan

who told me that, in his opinion, al-Jazeera, though fine on the Palestinian issue, is supportive of ‘terrorists’ in Syria, etc. (being based in Qatar) and in general not good on the rest of the Middle East. (“The Palestinians want their freedom, but the Syrian rebels are terrorists” or words to that effect), and said he prefers Asad, although he wouldn’t move to Syria, since he loves his home in the Golan. He mentioned a number of other news services. I think he said that he likes Ma’an, and mentioned a new one I hadn’t heard of (also starting with M).

One of the Italian women (Fiore, short for Fiorente), gave me the same argument about the symbolic nature of stone-throwing that I’d given Aaron the night before.  I must admit that hearing it from another person made it more obvious how hollow it is… I also chatted at some length with a man from the Netherlands who’s volunteered in Palestine (mainly in Jenin) several times. He recommended Cinema Jenin, and told me how it was founded by a man from somewhere in Europe who made a lot of money and also married a woman with money – and so was able to refurbish the old cinema in Jenin as well as a mansion nearby, which he turned into a hostel with all the ameneties. There’s a film about this, called Cinema Jenin, and he also recommended Jenin Jenin and The Heart of Jenin. In Ramallah, he recommended the Area D hostel 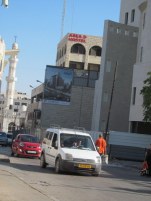 (n.b. there is no Area D)  and the Wehdeh Hotel. Good to remember for my next trip.

I caught a bus to Jerusalem almost immediately from Ramallah, but missed the Sheikh Jarrah demo (arrived there 5:30 for a demo that began at 4…). I was told that they’re quite small these days. I went down to the Damascus Gate area 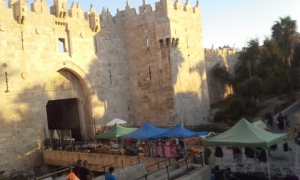 to shop for the next day’s South Hebron Hills jaunt with Ta’ayush (“Bring food and water for the day, a hat and closed shoes,” etc.) and had just enough cash left to purchase a small raspberry slush.

I’d never seen the area in front of the shops at the bottom of Prophets’ Street so busy, with many stalls on the sidewalk and spilling into the street. It looked like the bottom of Nablus Road was closed to traffic, creating a pedestrian mall, as well. I suspect this is a Friday afternoon phenomenon.

Then I headed into the old city to look for a money changer. After finding one after the other shuttered for the day, and other merchants beginning to shut down, I started asking where I could find one open. A candy merchant offered to change $40 for me, but wanted me to buy 40 NIS (more than $10 US) worth of candy from him. I refused, said I could afford 10 NIS maximum, and he came down to 20. Afterwards, I realized I could use the candy as a gift, but I kind of resented being forced to buy something I didn’t really want (not the nicest candy . . .). Then, as I found my way out via the Jaffa Gate, I encountered literally a dozen or more OPEN money changer shops!!! Next time,…..

My efforts to get to bed by 10 (because of the 6 a.m. meeting time for Ta’ayush – http://www.taayush.org ) didn’t quite pan out, and I hit the pillow by 11:30 or so (had a nice nap Saturday afternoon to make up for it). I got to the meeting place (“Liberty Bell Garden”) in plenty of time, and realized that I didn’t know precisely where we were to meet. I bet on the gas station, and when there was no one in sight at 6:02, started walking toward the adjacent parking lot. Just then, my phone rang (as it had the day before, when I was waiting in front of #14 Levontin St in Tel Aviv – as I’d been told to – and everyone else was in front of the restaurant at #16). “Are you coming?” – “Where are you?” “In the parking lot” and lo and behold, there was a group of 10 or so of various ages standing by a transit van. And Ezra Nawi* with his Toyota panel truck. We got going within 5 minutes or so, picking up an Italian woman  ( most likely from Operation Dove – http://www.operationdove.org ) along the way, whom we dropped at another village. The trip was shorter than I anticipated based on Michael and my experience going from Hebron in ’98. It only took about a half hour from Jerusalem travelling on the “settler road” that the van’s yellow plates entitled us to.

We divided up into smaller groups and headed to three different locations. Amir, a smoker who looked to be in his 50’s, Itzik, a younger man, new to Ta’ayush, and I headed off into the hills

to join a shepherd who wanted accompaniment (i.e., deterence of settler attack by the presence of Israelis and/or internationals). Amir set a fast pace, and I impressed myself by keeping up most of the time (the exception being one relatively steep and stoney bit of down-hill) despite the smoke that sometimes wafted my way. Along the way, Amir pointed out where one extended family had lived until 1999, when the army chased them away and sealed the caves they’d been living in. “Closed Military Area – Fire Zone.” They also forbade them access to their may cisterns,

which filled with silt over the years. One showed signs of recently having been cleaned out ,

and Amir ascertained that it was indeed the villagers who had do this, and not settlers. When we were very close to where the shepherd we were to accompany now lived, we get a phone call saying that he had been detained because he didn’t have his ID card on him. Later we heard that Ezra had gone to the shepherd’s home and brought it to him. Meanwhile, Maria had tried to vouch for his identity but her word was rejected and she was told “you don’t volunteer with the police department.” The land is apparently legally registered to the family, and they’re hopeful about a pending court appeal.

We then headed back towards a hill-top army base, where the shepherd had been released, and he and Ezra, and others from our group had gathered. We sat around, drinking coffee and chatting, and a bit later, sweet tea with mint, while young boys kicked around a soccer ball

on the clear ground in front of where the soldiers’ vehicles were parked, and half-a-dozen women sat in a circle nearby. Eventually we headed to Susiya village while Ezra went to buy felafel

for all of us. Sitting in an open tent in Susiya we were served mango drink (35% juice minimum!) in 8 oz tetrapacs. 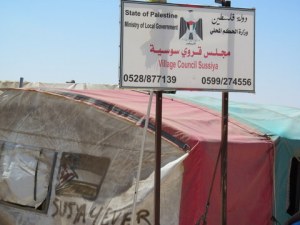 Really yummy. More chit-chat, then another walk (at a slightly more leisurely pace) to inspect a netting semi-tent that the settlers had erected beside a cistern nearby.

Another case of land owned by local folks being taken over by settlers, who were now bent on expanding. I think a demonstration is planned for next week.  Farewell to the South Hebron Hills until next Thursday . . .

Back to Jerusalem – we arrived at the park by 1:30 p.m. or so! I walked home, via a (wonder of wonders!) city-sponsored public toilet at the edge of a park right on King George V street and my favourite free wifi location at the top of the Ben Yehuda Mall. I had written to CPT asking if I could stay a couple of days with them, and cc’d Kathy Kern, whom I named as the CPTer I had the most ongoing contact with, and she now sent a note saying I was ‘kosher’ (later in the evening, Gabriel from CPT wrote to let me know I was welcome).

Home to more food, a hot bath and hair-wash and a much-needed nap.

* Some of us ‘old timers’ remember Ezra as the (then) anonymous plumber who used to distribute a rose to each of the (often 50 or more) women at the Women in Black vigils in Jerusalem every Friday back in the early nineties, now for several years a major activist with Ta’ayush in support of the people of the South Hebron Hills.

...working together to promote justice for Palestinians.