(Sept 10) It’s Wednesday, and I’m dictating this on the train from Tel Aviv to Benyamina to visit with Mimi (an old friend from my ‘workshop’ group in 1959-60) and hopefully afterwards to go to visit Rachel (Elana and David’s daughter) in Kafr Cana, where she works with the Sindayanna group (sindyanna.com), a Palestinian and Israeli-Jewish and -Palestinian group working together in a co-op producing olive-oil products and so on.

It’s been a frustrating couple of days: trying to contact people, setting up plans and then having to change them, because this the Middle East. George N came down with a bad cold yesterday, so I didn’t go to see him, which means I didn’t go to Beit Sahour to the AIC Cafe (www.alternativenews.org) to hear the presentation about the recent land confiscations, which would have been very interesting. My plan had also been to go to Hebron the next day to spend some time with Christian Peacemaker Teams (www.cpt.org), and I found out belatedly that all or most of the team are on retreat until Saturday. So I turned my program upside down and hopefully will get to both of those places in the coming week. Meanwhile, I went down to Tel Aviv rather late in the day on Monday, and had a nice visit with Adam Keller and Beate Zilversmidt at Ya’akov and Hava’s place (i.e., Adam’s parents). Hava had another stroke, and is basically unable to talk or walk – She can say a few words. Her words are clear, but apparently it’s very hard for her to get them out. Apparently she understands everything, and answers questions appropriately, and when she looked tired and her caregiver, Naif, asked if she wanted to lie down, she said yes. Afterwards, she was lying on the couch with a book in her hand, reading. So that’s encouraging. But it must be horrible for Hava, who has such a sense of humour and loves word-play, to be limited in this way. I wonder if they’ve tried any of those methods of pointing to words, etc…

Ya’akov is his old self, as argumentative as ever. He gave me a copy of the English translation of the first volume of his two-volume novel, Towers to Nowhere. Rayna Moss (who did the translations for Israel Shachak’s news summaries back in the 90’s) did the translation… And then I went and stayed the night with Elana and David Wesley in Jaffa, which is always an adventure, with Elana being a total, total night owl, forwarding emails about Middle Eastern and US political issues and activism, and watching sporting events on TV. In fact, she was still up when I got up at around eleven, having finally fallen into bed after three a.m.– after lots of chit-chat, as well as an urgent text from my husband, Michael, who needed to “hear [my] voice,” which was not that simple. Turns out the Wesleys didn’t know their newish computer setup included wifi, much less how to access it. But my “smart” phone indicated that they did. Since it was quite late at night, they weren’t able to retrieve/reset their password (this was successfully done in the morning), so I tried to call from my Skype account from Elana’s computer, which is attached by ethernet to the modem/router but couldn’t get my mic and earbud set to work (her computer recognized it but clearly required a two-plug arrangement to function properly). Elana, meanwhile, complained that her two-plug earphone/ mic set hadn’t worked since they got the new computer – and I suggested she plug them into the colour-coded sockets in front of the box (she had plugged them into the back), et voila, they worked! I finally spoke to Michael in the morning after texting him from Skype after an unsuccessful effort to do so from my phone.

The train I’m on is an express between the northern-most Tel Aviv station (University) and Benyamina, so only takes about half an hour from what I know as the “Northern” railway station (Arlozorov), but which is now referred to as Tel Aviv Central-Savidor. One more confusion.

I will be back in Tel Aviv tomorrow evening for Ilan Pappe’s talk, hopefully early enough to visit the Zochrot offices (www.zochrot.org), which I haven’t yet done. On Friday I hope to go to Nabi Salah for the demonstration there, because I’ve been to Bil’in many times; will probably catch a ride with Tel Aviv folks, and if all goes well, get back to Jerusalem in time for the Sheikh Jarrah demo. I’ll also sign up for the Ta’ayush trip on Saturday to the South Hebron Hills, which leaves from Jerusalem, and next Thursday I’ll be going with the Villages Group, also to the South Hebron Hills. It’ll be interesting to compare and contrast the two groups’ approaches; and I’ll be getting follow-up emails from Yoav about what’s going on with Dehamesh. I think they have a hearing today. . . .

Take a deep breath: It’s not all for nothing. I’m not wasting my time. If nothing else, it’s enjoyable to be in what was so long a home for me, and to feel at home, particularly in Jerusalem, and to see people whom I haven’t seen for a long time. So I hope I’ll see George on Monday or Tuesday (rescheduled for Wednesday); I’m going to Quaker Meeting on Sunday in Ramallah, and Jean Zaru

and I will go out for a meal and chat afterwards. She was really, really pleased to hear about the Canadian Yearly [Quaker] Meeting minute [on BDS], so that’s kind of nice. I did a short interview with Jeff [Halper] 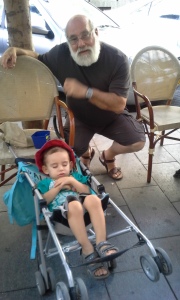 , and I didn’t formally interview Adam, but I think I’ll ask him about his thoughts, because I know he doesn’t agree with Jeff that things are as dire as he [Jeff] feels because of the ‘lack of strategic thinking’ and the lack of willingness to do strategic thinking, to strategize together and so on. I also want to talk to Adam about the state of joint struggle.

Amos Gvirtz gave a call about a big demonstration or vigil going to be happening at Tsomet Lehavim, the crossroads near el-Arakib*, this Sunday, because they have a hearing coming up Monday. But I doubt I’ll get there, although I did participate in one of their weekly demos back in 2012. 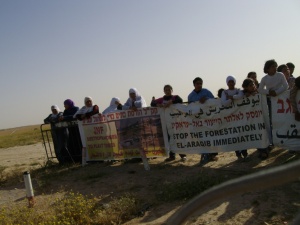 It’s 4:30 in the afternoon, so it’s not impossible. But it’s a long trip, and one more body in what’s going to be already a large demonstration is probably not worth it. On the other hand, it’s a propos (joint struggle inside the Green Line) because of the Prawer Plan and so on, so it might be a good place to be. If I end up mostly inside the ’48 borders this time, it’s no big deal, but I do want to see Neta and other folks in Ramallah, and if I can get down to Hebron to see Hisham and the CPTers–and Nafez, who is also down there, that would be nice. So we’ll see. . . .

And I want to interview Elana about her attitudes towards BDS, especially because she did comment that it’s time for people to boycott all of Israel. And on the other hand Danielle doesn’t even like the settlement boycott: “Look how many Palestinians lost their jobs because of the imminent closing of the the SodaStream plant in Mishor Adumim.” And my rejoinder, which I didn’t articulate very clearly to her at the time, is “look how many Palestinians are without work because of the policy of closure, and that the solution is to rebuild the SodaStream plant inside Israel and to invite the Palestinian workers in, not to invite workers from different countries before our neighbours.
_____________________________
* For more on al-Arakib and its 60+ demolitions since 2011, go to http://972mag.com/tag/al-arakib/